A view of our past from one of our brochures 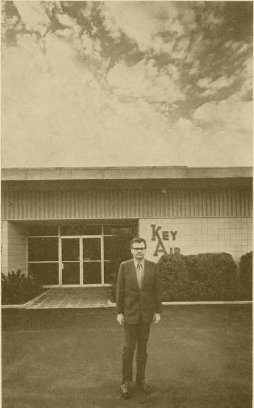 In 1960, Robert Heisler decided to take some time off from his air conditioning contracting business, headquartered in southern California, and go down to the beach and write an organization manual for the firm he bought into in 1956. After almost five years of operating without an organization manual, he was convinced that the company's personnel could not perform in the most efficient manner unless every person was familiar with the entire organizational structure-who his superior was, and what was expected of him in his job.

His conviction was proved correct. Within two years after the manual was adopted, the firm's volume of business doubled, and except for the necessary additional installers in the field, it doubled with no increase in personnel.

"We found out" said Heisler, "that we weren't working as hard as we had been prior to this organization. Every-one knew what his job was and what was expected of him."
A key phrase to be found through-out the manual that outlines the structure of each of the three companies that comprise "Key Air" of Santa Fe Springs, California, states that: "The primary objective of each company is to make a profit."

That objective, according to Heisler, can be attained by adhering to four firm company policies: 1) treat each customer fairly; 2) perform all work in a manner that is a credit to the industry and to the company; 3) make use of the highest caliber personnel available to operate all departments; and 4) properly evaluate all personnel relative to salaries, working conditions, benefits, and job demands.

It is the company's firm belief that the quality of its personnel is the primary item that will allow it to operate more efficiently than its competition and make a profit.

A look at the organization and personnel of Key Air vividly indicates that Key Air practices what it believes and sets forth in its organization manual.

Originally (in 1948), the firm was founded as Key Refrigeration Co., shortly after World War II. Later the name was changed to Key Air Conditioning Co.

In 1956 Heisler and Lee Sandahl bought Key Air Conditioning. The two met at the University of Southern California, where they both received their mechanical engineering degrees. Prior to the purchase of the business, both men were employed by other firms as engineers. Also, at the time of the purchase, two other men-Claud Bond and William Jennings-who were working for the original Key Air Conditioning Co.-bought into the business with Heisler and Sandahl. At the time, the company was strictly an air conditioning contracting firm, doing some service work. During the next few years, the owners füst established Key Refrigeration Co. to do their service and maintenance work, with Key Air Conditioning remaining as the air conditioning contracting firm. Then Key Engineering Co. was organized to handle air conditioning design work.

Three years ago, a filth owner joined the füm when Key Refrigeration acquired a Los Angeles firm that specialized in the repair and rebuilding of compressors, centrifugal, absorption units, and boilers. Its owner, William Ronofsky, is now vice president and general manager of Key Refrigeration.

Each of the companies has an identical, but separate board of directors composed of the original four owners, with Heisler serving as chairman for each board. (A slight difference exists in the makeup of Key Refrigeration's board, which also includes William Ronofsky.)

Each board meets twice each year to review-among other things-bud-gets and financia} goals, organization, and job descriptions.

Central accounting
Although the three companies of Key Air are separate, they all make use of a central accounting department that is directed by Heisler. Each company pays for its appropriate portion of accounting expenses.

The department handles accounting methods and procedures for the three companies as well as maintaining records and furnishing detailed cost information.
The economy in such an operation is obvious-separate sets of books must be maintained, but a single set of ac-counting equipment and accounting personnel can handle the work of the three companies.

The business of Key Air
Ninety percent of all Key Air's work is negotiated. Each of the companies works completely independent of the others, but are available to each other in order to provide what Heisler terms a "unity" or "total service" concept where all, or any combination thereof, of Key Air's services, are available to a customer.

In 50% of its work, Key Air negotiates the services of all three companies, "where," says Heisler, "we work originally with the architect and owner, do the design work, set the original budgets, install the system, and contract the service and/or operation work for many years there-after-this is the 'unity' concept where we accept total responsibility to the owner from start to finish. With many of the owners we work with, if we know the general scope and extent of a project, we will offer a guaranteed price on the engineering, total construction dollar, operation costs, and will live with that dollar figure through the life of the project."

A national contractor
Key Air Conditioning has a north-ern California division to handle its contracts in that section of the state, principally in the San Francisco area. It offers the same services as the home office in southern California, but does no consulting engineering work itself.

The firm also works outside California and is currently working in Boston, Seattle, Louisville, Cleveland, and even Hawaii, for example. In such projects, Key Air designs the systems, supervises the installation and in many cases puts its own personnel in the field to service and operate it afterwards. Key Air takes the contract and guarantees the price, but subcon-tracts the fabrication and installation of the jobs usually to contracting firms with which it is familiar.

All of these "far-away" projects are negotiated with a number of owners and developers with whom Key Air has established a reputation and an association.

The future
"The real limiting factor in growth," says Heisler, "is a contractor' s supervisory capabilities. As costs rise and margins become tighter, for profits you have to look more and more to your supervisory capacity.

. "We have been looking for a growth rate of 10 to 15% since we started this business in 1956. Our vol-ume then was $550,000; today ít is about $6 million ( which does not in-elude its engineering fees J. 'And in most years this has been the case. There have been a few years where the growth rate was higher.

"But we maintain good control of our growth. At one of the twice-held board meetings each year, the president of each company must submit to the board his budget for overhead, sales, etc. He meets with Central Accounting and reviews the past year's statements and develops a projected statement based on past experience and what he anticipates for the coming year. He submits this for approval to the board of directors."

"Several times it has happened that a company president will recommend a decrease in sales, reasoning that he doesn't have enough supervisory personnel currently and that the company will make more money by doing less business-such a recommendation has almost always been correct."

Heisler concluded his conversation in regard to Key Air with some comments about the business of contracting: "I think the contracting business is one of the real frontiers left in this country. It can be as exciting as the old rush days of 1849. But it also has the same danger-there are many contractors who haven't found the gold yet. It's there, but they don't know where to look. When you organize and determine what business you're in, then you find the gold."